A dual diagnosis of Down syndrome and Autism (DS-ASD) sounds scary, but it can be as much pleasure as it is a hindrance.

It’s a recent development in our society that a child can be diagnosed with both; prior knowledge stated the two conditions could not exist together.

“Parents were told their child had Down syndrome with a severe to profound cognitive impairment without further investigation or intervention into a diagnostic cause,” said Dr. George Capone of the National Down Syndrome Society. “Today, the medical profession recognizes that people with Down syndrome may also have a psychiatric-related diagnosis such as ASD or Obsessive-Compulsive Disorder (OCD).”

NDSS found that gauging the prevalence of Autism within adults and kids with Down syndrome is difficult. According to the society’s official research, current estimates show between 1 and 10%. Other research shows it as high as 10-15%.

“I believe that 5-7% is a more accurate estimate,” added Dr. Capone. “This is substantially higher than is seen in the general population (.04%) and less than other groups of children with intellectual disability (20%). Apparently, the occurrence of trisomy 21 lowers the threshold for the emergence of ASD in some children. This may be due to other genetic or other biological influences on brain development.”

Deciphering whether your child has a dual diagnosis is troublesome when all of these variables are considered. Maybe this is normal for kids with Down syndrome. Maybe she has ADHD or OCD.

Therefore, it’s important to consult with a professional service. My son, Shea, received his dual diagnosis from the Washington University Autism Clinical Center in downtown St. Louis. This came after years of uncertainty from Shea’s teachers, therapists, and doctors. 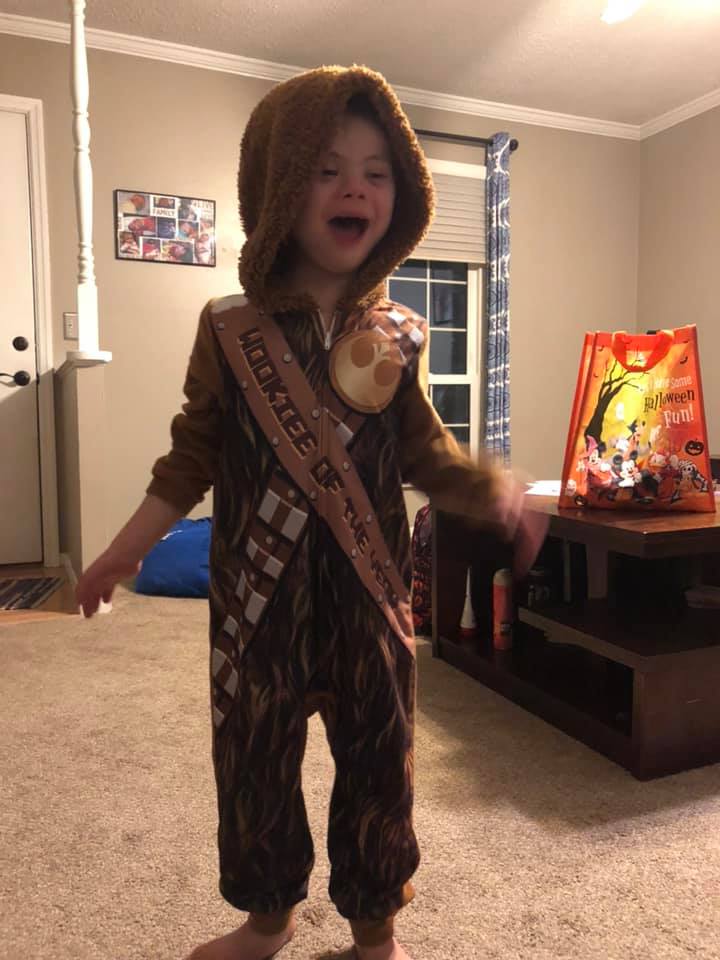 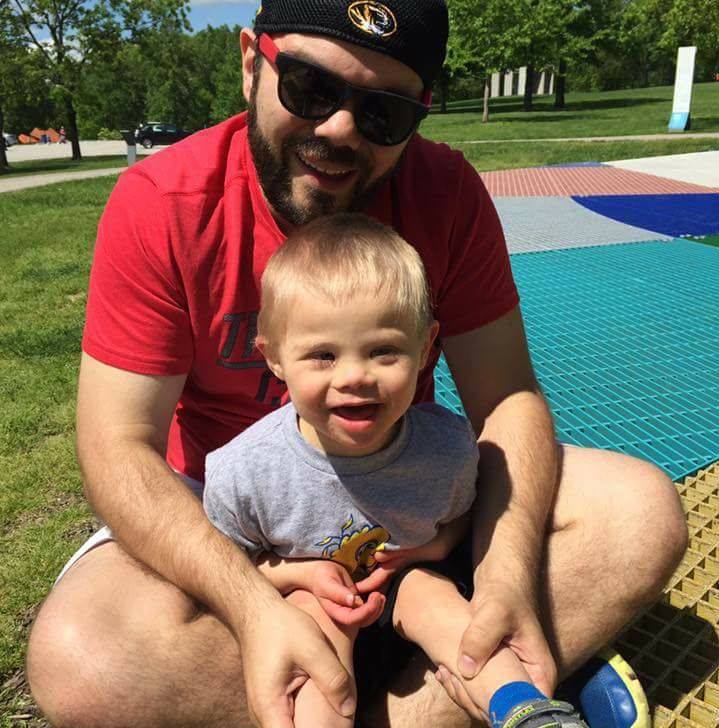 We always knew Shea was different

After all, things were different for us than many families the day Shea was born. We declined to have the amniocentesis test done and the ultra-sounds were normal. It wasn’t until hours after Shea’s birth that we discovered he had Down syndrome. It’s always been a little different with Shea.

He didn’t receive the autism diagnosis until he had just turned seven years old after years of speculation from myself and my wife, Jessica.

At a very early age, we noticed that Shea was sensitive to loud noises. Although he was a well-behaved baby in social settings, certain times in restaurants or stores, Shea would randomly become inconsolable. If we were at a restaurant that had too much background noise, he would instantly scream and cry until we left the setting.

As Shea grew into his toddler years, we began noticing his fascination with bright lights and ceiling fans. Oftentimes, we would have to forcibly remove him from a car headlight or from directly in front of the television because he would be completely pressed against the object. His motor and language development also started to plateau, so his teachers recommended starting ABA (Applied Behavior Analysis) therapy at school.

As he grew older, he never outgrew chewing on his hands. Still an issue to this day, he often gets sores on his hands from gnawing so much on his fingers. He’s also constantly flapping his arms when he’s excited, as well as grunting, whether happy or mad. Unlike most young children, Shea never seemed to grasp the concept of pretend play, so he never developed those important play skills. When around other children, he always showed interest in them by watching, but never would initiate play or interact with them. He typically preferred to play alone.

Last year we consulted with Shea’s educational team at his elementary school about whether they had seen the same patterns we saw at home. Every face was shocked when the question arose, which in turn, shocked us.

“What patterns of behavior are you seeing in him to make you think that?” they asked. We were also told, “Many of the behaviors associated with (ASD) Autism Spectrum Disorder are also seen in individuals with Down Syndrome.”

It made us feel like we didn’t truly understand our son.

We decided to proceed with receiving a diagnosis despite this meeting and were instantly met with understanding and resolve from the Autism Clinical Center. They assured us that these behaviors are extremely typical in dually diagnosed children and we had every right to suspect he needed more help.

At the end of the hour-long meeting, which consisted of four professionals observing how Shea played, all while asking us questions, Shea received an Autism diagnosis.

Unlike the shock of the Down syndrome diagnosis at birth, a wave of relief swept over Jessica and me. It meant that we truly understood Shea better than we thought. We also qualified for more help for Shea, meaning he would finally be getting the care and attention he needed for so long. 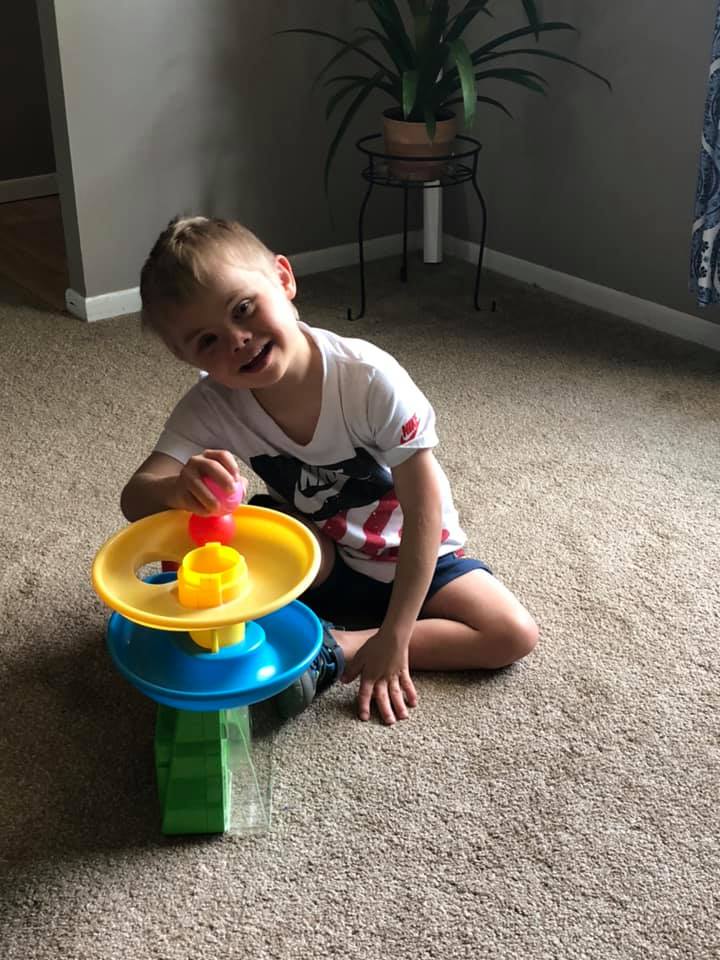 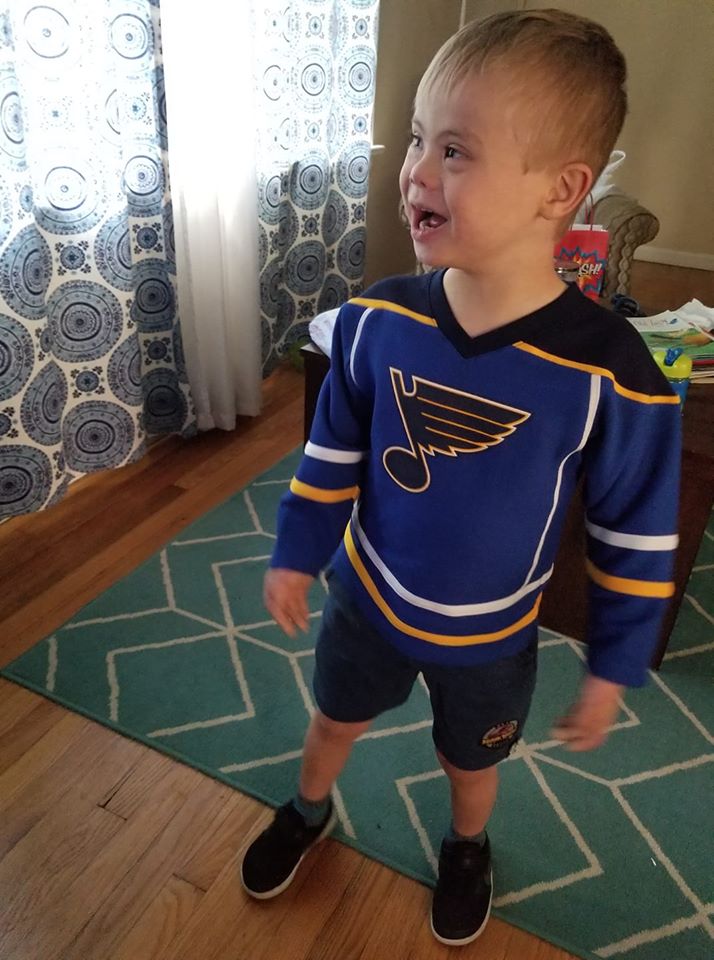 The Wonder That is Shea

Shea is definitely a unique individual. He loves watching Mickey Mouse, Spongebob Squarepants, superheroes and hockey. He enjoys playing outside on his swing set or with his basketball hoop. His bubble machine is another one of his favorite toys. Shea has started learning how to ice skate and use a hockey stick.

Being Shea’s parents has been an adventure, to say the least. He has provided plenty of drama in our lives, but the perks far outweigh any drawbacks.

Shea is the happiest child I’ve ever had the pleasure of knowing (just ask him and he’ll yell “happy” right in your face). When he learns a word, phrase or new action, he wants to continue doing it over and over to prove to himself that he can repeat it. Oftentimes, he finds himself to be the funniest person on the planet.

For example, one day, I was sitting on the couch with him. Despite being with him for over an hour, he just looks at me and says, “Hi dadda.” I respond with, “Hi Shea-Shea.” Then it just went in a vicious circle.

He busted up in laughter after each exchange, barely able to get out his retort. We often repeat this exchange, and the laughter never takes a backseat.

Another one of Shea’s favorite things to do is repeat a certain phrase on his visual-learning iPad. Although he’s never had it himself, he found the picture for coleslaw. For whatever reason, he finds this word to be hilarious, so he presses it over and over and laughs hysterically every time.

His enjoyment over the simple things in life is infectious. Parents often get bored with doing the same routine over and over with their children; sure, there are times when I come home from work and I just want to relax on the couch for a bit without being bothered. But when I hear Shea’s footsteps come running around the kitchen and into the living room, I know it’s time for entertainment, and a smile immediately enters my face. Whether it’s one of our repetitive word games or just wrestling around with him while Spongebob Squarepants plays in the background, I never want to shy away from hearing his laughter.

When he picks up on something new, I feel like an explorer discovering new land. Each time is an unforeseen journey and I can’t wait to see what happens next, even if it is repetitive behavior.. 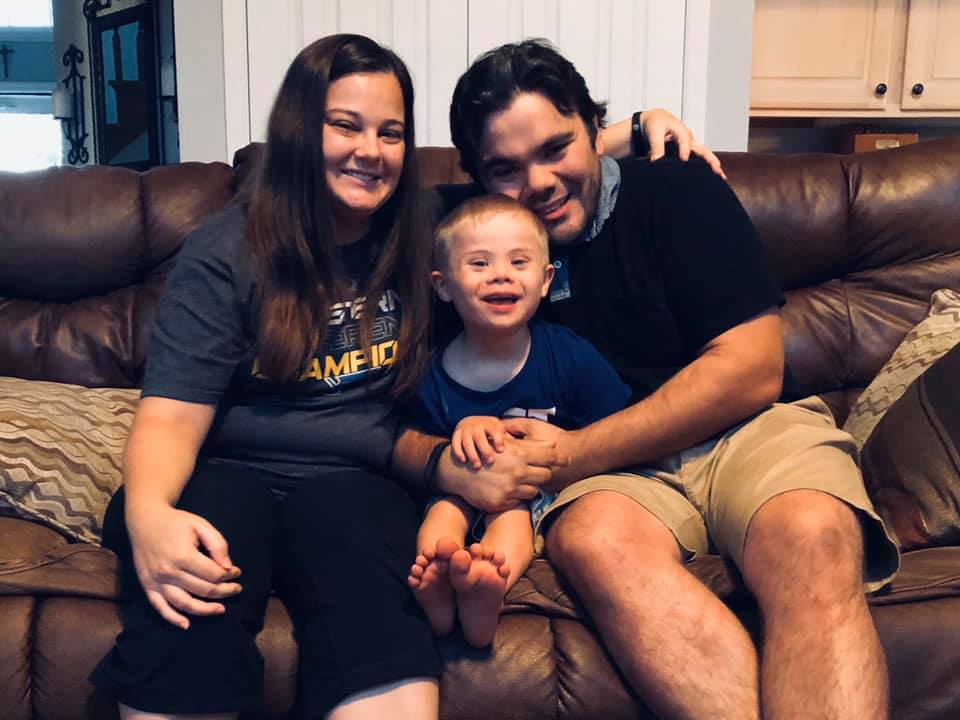 Shea’s favorite type of toy is anything that stresses cause and effect. For Christmas, a family member bought him a monster truck that, when shoved up against a barrier, wrecks itself. You then have to push a button on the tailgate and it fixes up, ready for another crash. When Shea first saw this toy, he thought the sounds it made were funny, but didn’t show much interest in the toy itself. After showing him the ropes and repeating the process a few times, I could see the lightbulb turn on in Shea’s head and he wanted to do it himself. Using the hand-over-hand method, I had him push the truck, then push the button after crashing.

Now, a common sound in our house is that of a truck crashing, followed immediately by laughter and joy

Shea is a beloved student at school, as well. When following a certain routine, he is a model student in the special needs class. His teacher often tells us that he walks in the door, sets down his backpack, grabs his cube chair and sits in their circle area. He then yells, “Sing!” because he knows the first part of the day is watching and participating in various musical YouTube videos.

His teacher says he gives lots of hugs (sometimes it’s a little too much), and he gets along with other kids, despite the stigma often associated with Autism.

On Halloween last year, we had a group of four boys come to our doorstep. One heard Shea in the background and asked, “Is this Shea’s house?” I told him yes and all four kids, all in fifth grade, wanted to come in and see him. One said that, despite being a second grader, Shea is “the coolest kid in school.” They all high-fived him and went about their evening. It was something many parents may dismiss as the kids being polite, but knowing Shea like we do, we believe these sentiments to be sincere.

I’ve been asked before which diagnosis is a larger hindrance and, if I had the power, which I would take away. My answer is simple: neither. Despite the struggles we have faced compared to typical parents, we are happy every day that Shea is who he is. Both Down syndrome and Autism help make up Shea’s personality, so we wouldn’t want either one to disappear.

Jessica and I are lucky to hang out with the coolest kid in school every day.